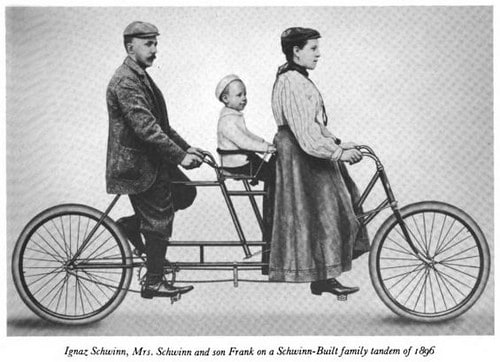 Schwinn is an American Bicycle Company based in Chicago was founded by Ignaz Schwinn in 1895. Ignaz Schwinn was a Mechanical Engineer born in German in 1860

Enter The Market and Dominate the Competitors

Schwinn started to grow up from 1950s throw FW Schwinn. He targets the retailers and persuades them to sell Schwinn bicycles.
In 1960 Sales Reached 4.4 million.

Schwinn First ( 1st ) racer bicycle was “English Racer” which was a Challenge to stay in the “RACER” bicycle market. In 1964 Schwinn dominated competitor by technology and style. Not only this Marketing tricks was amazing, though sued by the Department of Justice

Schwinn has some famous Models which was amazing in style, performance and acquired users attraction

The Corvette was developed in 1954

Schwinn Twinn: Schwinn manufactured 1950 – 1980 series of lightweight bicycle known as Schwinn Twinn and have some more

Now Schwinn Fitness is the major division of Schwinn Bicycle Company which got acquired by Direct Focus Inc, In later it becomes Nautilus, Inc

For Nautilius Inc it was disappointing because of two main reasons Weakness of Direction and Growth in Retail section profits was less as expected. Though Schwinn 411 Elliptical doing good and they expect more in Future

NOTE: If you have Questions, Want to Contribute Please don’t hesitate to contact me 🙂